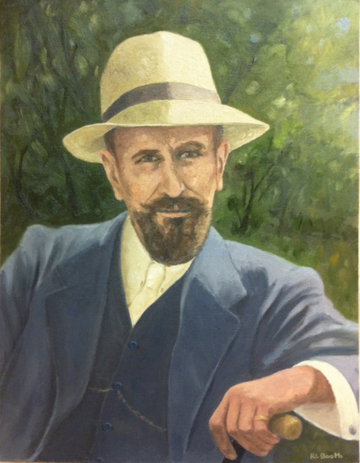 by Robert Lewis Booth
Oil on canvas board panel, size: 18" x 14"  :-  457 x 356mm.
French Impressionist painter, Pierre Adolphe Valette (1876-1942) was born in St Etienne France, he moved to England in 1904 and then later arriving in Manchester, in 1906 where he became Art Master at the Municipal School of Art Manchester he influenced his pupils with his impressionistic styles. Valettes most acclaimed paintings are of Edwardian Manchester, some are now in the collection of Manchester Art Gallery. one of his pupils was Laurence Stephen Lowry,
who went on to achieve world wide fame.

This French Impressionist had made a huge impact on the art world. His style distinctively Impressionist, combined with the damp and foggy atmosphere
of contemporary Manchester, was where he produce some of his best paintings.
Lowry admired and learned a great deal from Valette, who had introduced him to
painting the urban and industrial landscape districts of the Manchester areas.

Based on an After Photo Painting