A Portrait of William, Kate and Baby 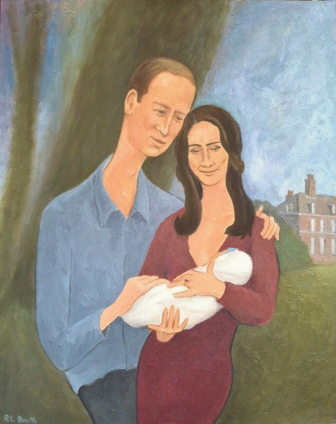 Oil on canvas board   20"h x 16"w.    508 x 406mm  22nd July 2013
The son of the Duke and Duchess of Cambridge has been named, George Alexander Louis, will be known as His Royal Highness Prince George of Cambridge.
How I came to paint this picture,
As I sat there one evening, trying to collect some ideas of what should my next
painting project be? Thinking to myself that I would like to try something totally different from my norm, something topical, now wondering what is the topic of the time? Then it came to me, yes, it will soon be the birth of the "Royal Baby"! OK but where and how on earth would I start? so I began by doing a bit of sketching and doodling to get some sort of  idea, In the process I tried to capture William and Kate with their new arrival, as a threesome, in the quietness and  presence of their own time, also it was not my intentions to try to get a perfect look-alike but similarities in Will & Kate, people will know who they are by the subject matter, also I wanted to keep the colors and detailing to a minimum, on finishing the painting it seemed to have developed a sort of Modigliani style which I was pleased about.