Burj Al Arab (the name means Tower of the Arabs)

The Burj at night 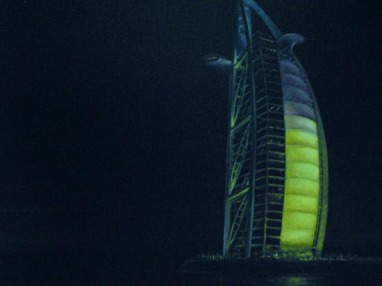 “An iconic structure designed to amaze”

The Burj Al Arab (the name means Tower of the Arabs) “A structure designed to amaze”. It’s the Worlds most luxurious hotel with a unique seven star rating. Standing 321 metres high on a man made island situated 280 metres from the Jumeirah beach in the Arabian Gulf off the coast of Dubai. Its iconic structure was designed as a ships sail billowing in the wind, resembling the sail of a dhow (a type of Arabian boat).Construction began in 1994, Architect and consultants for the project was Atkins, the UK’s largest multidisciplinary consultancy, with a team of British engineers led by architect Tom Wright. The hotel was built by the South African construction contractor Murray & Roberts. It was opened in December 1999, one month before the millennium.