Shortly after leaving art school I joined a band called the BlackJacks a group that was formed in 1958.origianlly formed by Post Office messengers who included Michael Beardmore, Joe Gethin, Pat Hunt, and Terry Evans.

We started as a skiffle group, inspired & influenced by the likes of Johnny Duncan and the Bluegrass Boy’s and our King of skiffle Lonnie Donegan.

Performing every Monday & Thursday evenings at Edensor church hall (St. Pauls) Longton Hall Lane, Blurton. The hall was packed both night’s no alcohol was allowed just tea & coffee everyone enjoyed themselves, the other group on stage were the Midnight Ramblers a great skiffle group, recalling some of the name’s in the Midnight Ramblers group were Clive Snape, Russell Hill,  Mick Mayer, Keith Huntley and Clive Tabbinor.

Later we moved from skiffle to Rock, as Rock ‘n’ Roll took over.

In the early days the group had no transport the only way they got around was by public transport sometimes by train but mainly by bus. Now imagine this the group with all their gear consisting of large base drum, large tom-tom drum, small tom-tom, side snare drum with stand, hi-hat cymbals, and two large crash cymbals, guitars, and amplifiers, we had to use a double decker bus and fit all this gear as best we could in the luggage area under the stairs of the bus.

I remember on one occasion when travelling back from Kidsgrove Working Men’s Club after doing a gig there we had to change buses at Stoke, we got on the bus were travelling along when the conductress stopped the bus and ordered us to get off which we refused to do,  she instructed the driver to drive to the police station in Copeland street stoke, The police came and said “come on lads get off the bus it’s nothing to do with us the conductress is in charge”, we got off, walked around the corner with all our gear to Glebe street bus stop and caught the next bus home.
BlackJacks playing at QVF Dance Monday 8th June 1959 at Longton Town Hall 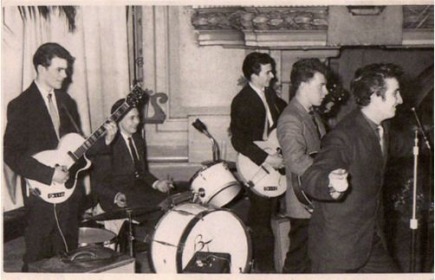 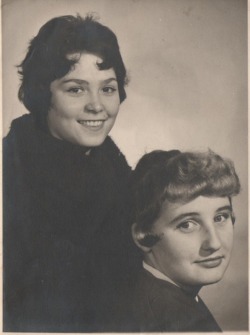 The Cotton Pickers  They deserve a mention  click photo to enlarge

The Cotton Pickers skiffle group, these were the lads that started it all off in Stoke on Trent, they were a great group and very talented, they played around in the city, always remember them on a Saturday night at the Cameo in Longton, it was always packed and everyone had a great time. I think Eric Leese could play almost any instrument.