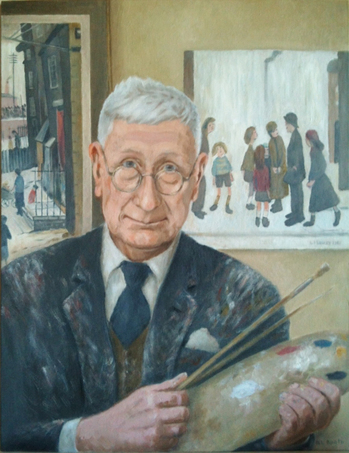 A portrait of Laurence Stephen Lowry.
By Robert Lewis Booth
Oil on canvas board panel, size: 18" x 14"  :-  457 x 356mm.
When compiling this portrait of Lowry, I decided to paint him as he would appear in
his early seventies, this was the age when his reputation began to establish, it was
then in 1962 he was elected an RA, It was during this time when his fame and
success developed.
Also In the portrait I have chosen two paintings of Lowry’s for the background, these
are not to any scale but suit my purpose, the one to the right is titled "A Group of People” LOVE THEM! and the one to the left is a part of “A Procession”
As you can see, Lowry painted in his shirt, tie, waistcoat and an old suit, wiping
his brushes on his sleeves and lapels. 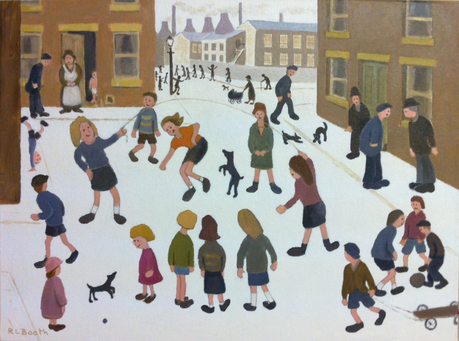 Lowry Kids      by Robert Lewis Booth
Oil on canvas panel  12"x 16"      305 x 406mm
Laurence Stephen Lowry, English artist, born in Stretford, Lancashire. known for his
paintings of the industrial landscapes of the north west of England.                           His stylised pictures of coalmines, factories and terraced houses were mostly
painted around Pendlebury and Salford, near Manchester where he once lived and
worked.  With his recognisable style of crowds of simple dark figures, he
developed this distinctive style of painting and is best known for his paintings
of people often referred to as "matchstick men".
In 1936 Salford Museum & Art Gallery started collecting some of the paintings
of L S Lowry, this collection of paintings and drawings are now held at the
centre of the contemporary building bearing the artist's name, " The Lowry "
which is situated in The Quays, at Salford, Greater Manchester. 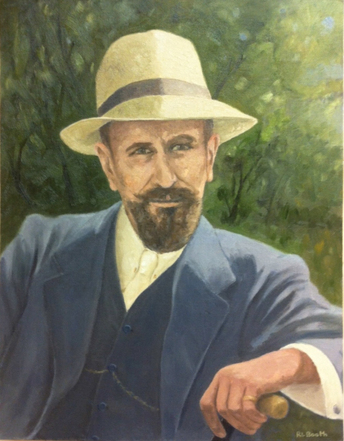 A Tribute to :-
French Impressionist painter, Pierre Adolphe Valette (1876-1942)
was born in St Etienne, he moved to England in 1904 and then later arriving
in Manchester, in 1906 where he became Art Master at the Municipal School
of Art Manchester he influenced his pupils with his impressionistic styles.
Valettes most acclaimed paintings are of Edwardian Manchester, some are now in
the collection of Manchester Art Gallery. one of his pupils was Laurence Stephen
Lowry, who went on to achieve worldwide fame.
This French Impressionist had made a huge impact on the art world.
His style distinctively Impressionist, combined with the damp and foggy atmosphere
of contemporary Manchester, was where he produce some of his best paintings.
Lowry admired and learned a great deal from Valette, who had introduced him to
painting the urban and industrial landscape districts of the Manchester areas.